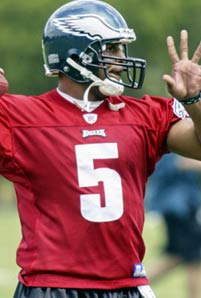 Breaking News:  The Philadelphia Eagles have shut down Donovan McNabb’s passing until training camp in late July due to shoulder “tightness”

(Philadelphia, Pa) — Here we go again, another off-season and another big question mark on quarterback Donovan McNabb’s health (sports hernia in ’05, torn ACL in ’06, and missed two games with an ankle injury in ’07).  The 9-year veteran sat out today’s Philadelphia Eagles’ passing camp OTA with shoulder tendonitis and he will be shut down until training camp starts at the end of July.  Everyone knew something was wrong when McNabb was on a “pitch count” at the last set of OTAs, but the Eagles and head coach Andy Reid downplayed any idea there might be an injury. McNabb already needed a strong off-season and early first part of ’08 to quell catcalls for Kolb, so he should definitely approach his shoulder rehab earnestly.

Hopefully for Birds’ fans, McNabb’s shoulder just needs rest and he will take the time needed before reporting for training camp at Lehigh University on July 21.  The injury cannot help, but to further strain an already tenuous situation between the five-time Pro Bowl player and the Eagles as there have been rampant rumors some “loyal” Philadelphia Eagles fans and media that the team will be going with 2007 second round pick Kevin Kolb in ’09 or earlier.  The young confident passer from the University of Houston definitely has a “swagger” this off-season after being elevated to number two on the depth chart, so McNabb better watch his back.  Kolb also has built up a steady rapport with the Eagles front-line receivers during OTA workouts that McNabb has missed.

There is no denying McNabb looked good in the Eagles’ last four games of ’07  (96.2 QB rating) adding to his almost 10-year impressive resume. But the NFL is a “what have you done for me lately” league, where a respectable 19 touchdowns and only 7 INTs season doesn’t amount to much when the playoffs are missed.  McNabb needs to get healthy and lead the Eagles back to the playoffs for first since the Super Bowl season of 2004.

My colleague Garry Cobb on his website Gcobb.com reported that McNabb is working with Randy Johnson’s pitching coach out in Arizona.  Hopefully McNabb will stop working with the guy and find a passing specialist (suggestions could include college quarterback teaching guru Steve Clarkson, Jerry Rhome, or even hall of fame quarterback Warren Moon, who talks to #5 often).

This situation definitely needs to be monitored, as shoulder pain is another hurdle for Philadelphia’s biggest football lightning rod.

Lloyd Vance is a Sr. NFL Writer for Taking It to the House and an award winning member of the Pro Football Writers of America (PFWA)