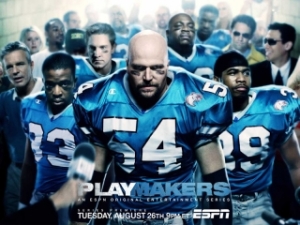 Anyone looking for something to watch until NFL training camps start in late July, may get their fix from the old ESPN dramatic series Playmakers

PHILADELPHIA — The early summer period before training camps start in late July — the Houston Texans and Miami Dolphins will be the first to open camp as both have rookies reporting on July 22nd — is considered “Down Time” around the NFL.

Many people that work around the league including players and coaches take this time for a well-deserved month of re-charging before training camp begins.

Organized Training Activities (OTAs) for most teams have shut down with many players returning to their hometowns, attending charitable events like golf tournaments, running football camps, or simply taking a vacation.

However as a self-described football junkie I have chosen to always be tuned into football even if the NFL is dormant.

There are several football related diversions to sooth my NFL fix including NFL Network (“NFL Football 24/7”), NFL Films documentaries/features, player holdout news, player camps, football related movies to watch (my choice is Any Given Sunday), the NFL Supplemental Draft, and minor league football (No NFL Europe, but the Arena Football League season is ending and the Canadian Football League is beginning, though these leagues are not NFL caliber, it is fun to watch when the NFL is quiet).

Yes, I am football crazy enough to watch the AFL, CFL, or put in a DVD from the NFL’s most disliked series Playmakers.

Conversely the only people still focusing on the daily grind of the NFL at this time are GM’s and Head Coaches. Some may try to vacation and take their mind off the sport, but most decisionmakers, that I have talked to, hate this time of the year.  As they usually spend this “off” month putting the final touches on training camp preparations while nervously checking news outlets to make sure that none of their players run amuck during their time out of the NFL’s reach.

Unfortunately everyday it seems there is some player related story where a situation occurs that could lead to a “hangover” going into their team’s next season (think Michael Vick’s Dogfighting, Marquis Hill’s unfortunate jet ski accident, Kellen Winslow/Ben Roethlisberger’s motorcycle escapades, etc).

Even with Commissioner Roger Goodell threatening to come down on teams for destructive player misconduct there is still an ongoing issue with surprisingly new faces.

There has been a reported 26 players involved in arrests or cited since the Super Bowl this off-season versus 27 players at the same time last year.The situation has gotten so troublesome that even with notorious Dallas Cowboy bad boys Pacman Jones and Tank Johnson drinking their milk and getting to bed early there have been several other players picking up their headline slack.

Even if the NFL is pseudo “quiet”, there will be plenty to come this month as the Rookie Symposium, Arena Bowl XXII, the NFL Supplemental Draft, and other events on the football calendarwill briefly take over the spotlight.

Until then NFL players enjoy the little bit of downtime that you have left -– not too much though, i.e. STAY OUT of TROUBLE — since the reality of hot two-a-days in the sun of training camp will be here before we all know it.