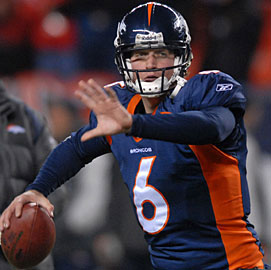 Jay Cutler is now a Chicago Bear, but we will have to wait and see if the Monsters of the Midway gave up too much to land their new franchise QB

This year’s “Favre-ian” quarterback melodrama came to a rather quick end as malcontent Broncos quarterback Jay Cutler was traded only days after Broncos owner Pat Bowlen said that his former first round golden boy’s Broncos career was over.

The Broncos traded Cutler to the Bears for quarterback Kyle Orton along with first-round picks in 2009 and 2010, and a 2009-third round pick. The Bears will receive Denver’s fifth-round pick this year along with their new strong armed quarterback. All along everyone thought that Cutler would land with the Washington Redskins, but I guess even Daniel Snyder was not ready to part ways with two 1st rounders for quarterback who has so far made a living in the NFL off of potential.

The move by the Bears is a “gamble” in that you are adding a quarterback who has all the tools in the world, but who also has never played in a playoff game (17-20 as a starter), forces passes that sometimes end up as interceptions (37 career INTs in 3 years), allegedly likes to party, and is a noted immature player.  Remember Cutler and his agent Bus Cook forced the Broncos to make this deal when it became apparent that the petulant passer would never forget that new head coach Josh McDaniels had put him on the trading block.  By the way, GET OVER IT Jay!! Even hall of fame legend Terry Bradshaw was on the fastest car out of town before the Steelers and him worked it out.

Cutler (2008 passing numbers of 384-616, 62.3%, 4526 yards, 25 TDs, and 18 INTs) will find a new beginning with a Bears team that finished 9-7 in the 2008 regular season, but they were unable to catch the NFC North division winning Vikings due to inconsistency.  Everyone wanted to blame Orton, who was a winning quarterback, but the real problem was a receiving core void of a true playmaker.  The Bears  receiving core’s main player is kick returner turned receiver Devin Hester (51 rec for 665 yards,  13.0 ypr, and 3 TDs), so it is easy to see why their offense has leaned on tight end Greg Olsen (54 catches) and rookie running back Matt Forte (63 receptions).  Cutler will now have to make believers out of the tough Windy City faithful, who have been looking for a franchise quarterback it seems since 1985 Super Bowl hero Jim McMahon.

Cutler is supposed to be a top-five quarterback entering his prime, but now he will have the weight of being the bell cow of a “Herschel Walker” type trade.  Be careful what you wish for Jay…Everyone will want an instant high-octane offense from the Bears now that Cutler is in town.  However you can probably expect a full summer of learning from the former Bronco with a receiving group that is below average.  The key will be,  if the Bears can find a pass catcher on the level of departed receiver Bernard Berrian (left for Vikings in 2007 free agency).

Right now on April 2nd, the trade looks good for both sides, but it remains to be seen if Cutler is the next Brett Favre or Jeff George.  Those two were also quarterbacks who were traded early in their careers, but in the end they had very different journeys in the NFL.