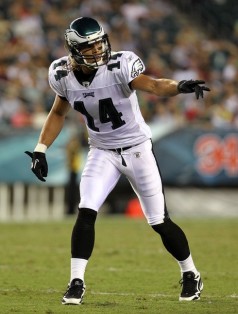 The 100th meeting of the Philadelphia Eagles and Dallas Cowboys may have lost some of its luster, due to some calling it “A Meaningless Week 17 Game”.  However I believe Lincoln Financial Field will see a good game on Sunday since die-hard Eagles fans know there are really two games a season that are “Must Win” and both of them are against the hated Cowboys.  Hopefully the game like several other “resting” type games this week in the NFL — 11 of the leagues 12 playoff spots have already been claimed — still will have some competition. Because like most people in NFL media, I always like watching meaningful games in Weeks 16 and 17 rather than having to be stuck with “glorified” exhibition games because teams already in the playoffs choose to rest players.

The Eagles (10-5), who are the 2010 NFC East Champion and the locked-in No. 3 Seed in the NFC, are in search of some momentum heading into the playoffs and the Cowboys (5-10) are looking to solidify the position of their “interim” head coach Jason Garrett.  Currently the Cowboys lead the all-time series 55-44, but I fully expect that the “young” Eagles (WR Riley Cooper, CB Dimitri Patterson, TE Clay Harbor, QB Kevin Kolb and others) will carry the torch for some resting veterans in this December tilt — i.e. starting QB Michael Vick will be out with a badly bruised quad.  And Eagles head coach Andy Reid recently reiterated the importance of playing well against Dallas in Week 17.  In his Friday presser, Reid said “The bottom line is it’s the Cowboys versus the Eagles and those are always exciting games. And like I said, I thought our guys had a couple good days of practice and we’ll be ready to roll.”

The Cowboys are expected to be led by a youthful quarterback too as 2nd year pro Stephen McGee should be at the controls as former second-string starter John Kitna is out with a hip injury.  Whomever is the quarterback, look for the Cowboys to establish the run early with their three-headed monster backfield of Tashard Choice, Marion Barber, and speedy Felix Jones -– Eagles have allowed 1607 rushing yards for an average of over 100 yards per game – plus get the ball to Pro Bowl TE Jason Witten (almost 1,000 receiving yards in 2010).  Week 17 or not, the Eagles will need to get a solid effort from rookie MLB Jamar Chaney after his defensive unit was just gouged by Vikings RB Adrian Peterson for over 100 yards and a touchdown on Tuesday Night.

If as expected the starter is third-stringer McGee, look for Eagles defensive coordinator Sean McDermott to dial-up “pressure” against the youngster from Stephen F. Austin.  With the Eagles still working out the kinks on defense –- have allowed 363 points for an average of almost 23 points per game -– they cannot afford to rest too many players as playoff intensity is right around the corner.  And even if they wanted to rest several defensive player, injuries to players like DT Jeff Owens (knee) and Bradley (elbow) won’t allow it.  Eagles head coach Andy Reid said of resting player, “We only have 53 players on the roster, so we can’t rest everybody”.  Expect the McDermott to once again lean on key defensive players Pro Bowl CB Asante Samuel (NFL leading 7 INTs) and DE Trent Cole (10 sacks).

When the Eagles have the ball offensive, they will need to get more out of their running game (called 55 passes and only ran it 16 times in the Vikings’ loss) and establish emerging RB LeSean McCoy on screens too.  The Eagles lack of a running game and some recent offensive line woes must be corrected as the Vikings were allowed to harass Eagles QB Michael Vick all-day on Tuesday – finished with 6 sacks and their quarterback was hit double-digit times.  The Birds were never able to find explosive Pro Bowl WR DeSean Jackson (only 3 catches) too against Minnesota, so look for the mercurial receiver to get his touches early and then get out the game if Philadelphia leads.  Though the season would be over for several other teams in the Cowboys current position, you can count on pass rushers DeMarcus Ware and Anthony Spencer plus Pro Bowl NT Jay Ratliff to bring their A-game against the hated Eagles.  If the Eagles are to have any success against Ware and his mates, Kolb will need to make plays in and out of the pocket plus spread the ball around to everyone and not just recently-hot TE Brent Celek.

Speaking of the Birds’ offense, earlier this December the Eagles fueled by big plays from Pro Bowl players Vick and Jackson rode their way to a 30-27 win in Cowboys Stadium.  Jackson was speedy as he got deep over and over to the tune of 4 catches for over 200 yards and Vick was a force inside and outside of the pocket.  But this time expect to see rookies like, Cooper and returning starter Kolb as “health” and not winning a Week 17 game against an already packing division-rival seems to be paramount, to several people that I talked to, heading into the playoffs.  However if Jackson does play, I am sure the Cowboys will be looking for some revenge for his “Nest-Tea Plunge Endzone” antics while scoring a touchdown the last time the two teams met on December 12th on Monday Night Football.

Of course Philly will want to wash the bad taste of an ugly 24-14 home loss to the Vikings in the NFL’s first Tuesday Night football game since 1946. But the playoffs are key for the Birds and more than likely they will be facing a tough test against the Green Bay Packers or defending Super Bowl Champion New Orleans Saints.  Rivalry or not, the Eagles should use Sunday’s game as a way of getting second stringers some opportunities, because you never know who could be a playoffs star after being a back-up.  Just ask former Super Bowl Champion quarterback Doug Williams, who went from a backup to a historic win for the Washington Redskins in 1988.

So it will be Eagles-Cowboys once again and I don’t expect Eagles’ fans to put away their disdain for Dallas even though it is a “meaningless” game to some.  Remember how bad Dallas thumped the Eagles 3 times in the 2009 NFL Season including the playoffs… There that should help reignite the flames of disdain for Eagles fans.

Eagles head coach Andy Reid said of cleaning some things up against Dallas on Sunday after a bad loss on Tuesday, “Yeah, listen, and that was the disappointing part of the last game, that we had too many penalties, substitutions were off, and that’s my responsibility to get that right.”  Reid who is now 37-17 in the month of December for his career added, “We’re aware of that now, now we just have to make sure we do it right and get it straight.”

LV’s Pick:  My prediction is the Eagles over Cowboys, 20-17 as Pro Bowl kicker David Akers puts one through to send the Birds’ faithful home with a win for the New Year.  Also watch for Eagles rookie TE Clay Harbor in this one as the youngster catch his first career touchdown in Week 16. But we all know that the games that really matter will be starting next week.