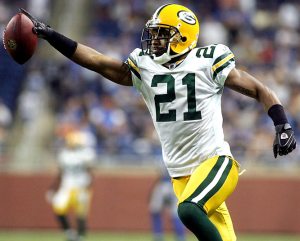 The road to Super Bowl XLVI (February 5 in Indianapolis, IN) will begin tonight as the 92nd Season of the National Football League will officially kickoff at historic Lambeau Field.   For the eighth consecutive season, the Super Bowl champion will open the slate as the Green Bay Packers will host the 2009 NFL Champion New Orleans Saints (Sept. 8 at 8:30 p.m. ET on NBC).  The regular season start of America’s favorite sport will also include a concert by Grammy Winners and fireworks.

All the hoopla will signal a new beginning for the sport that everyone is watching — according to Nielsen Media Research, the NFL reached 207.7 million unique viewers in 2010, the most in history.  Week 1 in the NFL season is almost at the holiday level as football fans everywhere finally quench their thirst for “real” NFL game action. Especially after the 136-Day NFL Lockout dominated league news rather than mini-camps, OTA’s, and the many other events on the NFL Calendar.

I am not sure if it is the quick five-month schedule where the games come and go before we know it, the long arduous 7-month wait for real games after the Super Bowl, the once-a-week high, the “every game counts” subplots, the talented players that always amaze you with their toughness and ability to perform under mental and physical stress, the autumn weather, team allegiance, trash-talking, the dreaded g-word (gambling), fantasy football, or any other thing.  But we all know that the NFL is everyone’s sports obsession like none other.

Football brings people together from all walks of life and gives commonality where almost everyone has a team and a rooting interest from the guy working at the local convenience store to President Barack Obama — supporter of the Pittsburgh Steelers.  The NFL has even infiltrated sometimes stuffy Corporate America as Fridays are now, “Wear your NFL team’s colors to work day”.  Co-workers during lunch or coffee breaks will be talking fantasy football line-ups, poking fun at each other’s team, and comparing the best venues to watch the game each weekend until February brings the curtain down on the season.

Football fans everywhere can now shout “Hallelujah” as their lengthy wait for “real” NFL game action since the Super Bowl in February is finally over.

The first game of the 2011 NFL Season features two of the NFL’s best passers, Saints QB Drew Brees and Packers QB Aaron Rodgers squaring off in a highly anticipated game.  The Packers will be trying to become the first team to repeat since New England in 2003-04 and I am sure the “Cheese Head” Nation” will pack newly renovated Lambeau Field – expected crowd of  over 70,000 – to see the NFL’s opening game.

But after an offseason of the Packers basking their Super Bowl glory (NFL record 13th Championship) and the Saints licking their wounds after an embarrassing loss to the lowly Seahawks (7-9) in the NFC Wildcard Round, everything starts anew with the scoreboard reading 0-0.

Though both teams have had some injuries, additions, and defections since the end of the 2010 NFL Season, pretty much their nucleuses and plan of attack should remain the same.  You should expect a ton of scoring as these two teams finished No. 10 and 11 respectively (Packers 388 points; Saints 384 points) in the NFL’s team scoring category last season.  Though the quarterbacks are the marquee players, I do believe the team that can run the ball more effectively and gets the most defensive pressure is going to win this game.

A big key for the Saints will be their defense’s ability to beat-up and rattle Rodgers (312-475, 3922 yards, 28 TDs and 11 INTs). But the Saints can’t just focus on the Super Bowl XLV MVP as there is more to the Packers than their talented passer.  Offensively, the Packers  love leaning on Rodgers — led the NFC conference with a 101.2 passer rating — throwing the football to his bevy of receivers including James Jones, Jordy Nelson, Donald Driver, TE Jermichael Finley and Greg Jennings (76 receptions for 1,265 yards, 16.6 ypc, and 12 TDs – 1st in NFC).  But I think one of the biggest keys on Thursday will be Green Bay’s ability to establish the run with Ryan Grant (former 1,000-yard rusher coming back from a knee injury), John Kuhn (6 TDs) and rookie James Starks .  Getting a running game against the Saints should tire-out New Orleans fast attacking defense while keeping Brees and his dome track team on the sidelines.

Watch for Saints DC Gregg Williams’ group, led by MLB Jonathan Vilma and DT Sedrick Ellis, to try and harass Rodgers with constant pressure to get his high flying spread offense out of sync. It will be interesting to see how the Saints’ defense fares against Packers’ head coach Mike McCarthy’s many weapons.  But you can expect to see a lot ofNew Orleansgreat secondary in press coverage with S Malcolm Jenkins, CB Patrick Robinson, SS Roman Harper, and CB Tracy Porter leading the way in stopping Rodgers’ multitude of weapons.  After being very opportunistic and leading the NFL in takeaways on their way to a Super Bowl title in 2009, the Saints had trouble stopping teams in 2010 – allowed 307 points.

Balance will allow Brees to then go play-action to receivers Colston, emerging TE Jimmy Graham, and homerun threat WR Robert Meachem – New Orleans led the NFL with a completion percentage of 68% — against a Packers defense who were 2nd in total defense during the regular season. Of course, the number one player that Packers defensive coordinator Dom Capers will be targeting is Super Bowl XLIV MVP Brees.  ButNew Orleans also has a physical offensive line led by Pro Bowl RT Jon Stinchcomb and probably the best offensive guard in the league, Jahri Evans.  The key will be the Saints interior line going against Packers mammoth nose tackle BJ Raji.

Defensively for Green Bay, it will be incumbent on Packers’ defense led by LB Clay Matthews Jr (2011 NFL Leader in Sacks with 16) in forcing pressure and creating turnovers.  The Packers will need to get to Brees, so that the he can’t get the ball to Graham, Sproles and Meachem.  The Packers will also need to keep an eye on my X-factor, the explosive Sproles. To combat the Packers anticipated attacking scheme — ranked among the top five in the NFL in nearly every pass defense category plus had 24 INTs — the Saints will need for offensive weapons  to get their touches early.  In the 2010 season, New Orleans was a different team when playing with an early lead.  However you can count on Matthews and his fellow linebackers that play in Dom Capers 3-4 scheme plus Woodson and CB Tramon Williams to bring their A-games against the Saints.

Turnovers are going to be “huge” in this game, especialty for New Orleans who were -6 in  turnover ratio  in 2010.  Watch for Woodson for Green Bay and a very good secondary for New Orleans led by DB Malcom Jenkins to look to be opportunistic.  And the second area to watch is special teams, the Packers have stellar kicker Mason Crosby, while the Saints inconsistent kicker Garret Hartley (20/25 on FG Attempts in 2010).

LV’s Pick:  This is a tough game, because both teams have a ton of weapons offensively and it is so early in the season.  The “X” factors of running the football and getting to the quarterback will be paramount in this match-up.  Though I expect a big game from a motivated Brees, I still believe thatGreen Bay at home in front of their partisan crowd will be too much for the dome-loving Saints.  You can expect a high-scoring game, but the Packers, especially McCarthy and Rodgers, want to show the world that last year was not a “fluke”. The Packers home crowd will be rocking as their team opens their Super Bowl defense with a win – Packers 31, Saints 27

Lloyd Vance is Editor for Taking It to the House and an award-winning member of the Pro Football Writers of America (PFWA).  Lloyd can be reached on Twitter @lloydvance_nfl