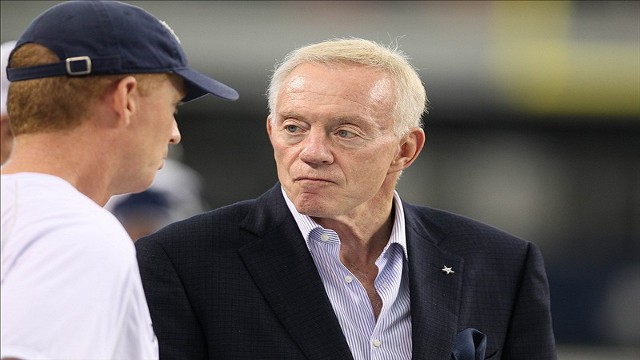 Could the Dallas Cowboys improbable Week 13 overtime loss to the Arizona Cardinals lead to another late season swoon? We know team owner Jerry Jones and head coach Jason Garrett sure hope not.

Week 13 of the 2011 NFL Season was not a good one for the NFC East-leading Dallas Cowboys (7-5).  A purely winnable game turned into a devastating loss as the Arizona Cardinals (5-7) gladly took home a close 19-13 overtime home win.  While the Cowboys were left to wonder, “What If”.  The winning margin came quickly in OT as Cardinals reserve RB LaRod Stephens-Howling turned a short pass from QB Kevin Kolb into a dazzling darting 52-yard touchdown reception.

The improbable win was also fueled by some sloppy play by the Cowboys including their head coach Jason Garrett inexplicably “icing” his own kicker on an end of regulation field goal attempt.  Garrett later said he didn’t like the fact that the play-clock was quickly going down as rookie kicker Dan Bailey was about to attempt the 49-yard potential game-winner, so he called a timeout.  Of course, Bailey – probably the NFL’s Special Teams Rookie of the Year – banged the non-counting kick right down the middle of the goalposts.  Then after Garrett’s untimely timeout, like a bad Hollywood ending, the young kicker’s next attempt was short to the left, which left the Cowboys’ head coach truly feeling like a red-headed stepchild.

In the first place, it was almost absolutely crazy that Dallas, who has a roster filled with former Pro Bowl players, were even in a tooth-and-nail game that was tied at 13-13 with 5 minutes left against the lowly 4-win Cardinals.  But then to lose in such bonehead fashion – Romo spiking the ball instead of taking one of two remaining timeouts, a false-start penalty, and Garrett’s icing — was the cherry on top to the legions of non-Cowboys fans.  Garrett said of the “icing” the kicker debate, “We chose to play it this way, and unfortunately, it didn’t work out for us this time.  Hopefully, in the future, it will.”

The overtime loss also snapped the Cowboys’ four-game winning streak and cost them a huge chance to open some much-needed ground between themselves and the rest of their divison – namely the New York Giants, who are lurking one game back with a record of 6-6.  Cowboys’ owner Jerry Jones said after the Arizona loss, “For us to have been in that spot to begin with was very disappointing.” The hands-on owner/architect – looking quite perturbed — added, “I hoped, we all hoped, we’d be in better shape to go play the Giants.”

However one can say that the loss to Arizona could have been expected.  As Dallas has lost three times to the Cardinals since 2008, mostly in agonizing fashion.  Oh by the way…. Did I mention the fact that the Cowboys-Cardinals contest also marked the beginning of the December portion of Dallas’ schedule?  This point cannot be lost on NFL Universe.  I don’t know if it is a Thanksgiving hangover or a too much rest thing (10 days off), but clearly the Cowboys are not the same team when the calendar turns to the last few weeks of the season.

Since quarterback Tony “Mr. November” Romo – record of 18-2 in Turkey Month including a perfect 6-0 mark on Thanksgiving — took over, typically the Cowboys have struggled finishing out seasons.  Since 2006, including their recent loss to the Cardinals, the Cowboys have a combined end of season record of 11-13 in 24 games plus they have been outscored by their opposition 556 to 479.  Of their end of season record, the month of December – 22 games – is by far the worst with an astonishing mark of 9-13… Wow can you say “Wake me up when December ends”.

Here is a breakdown of the Cowboys late season games and how they have finished since 2006:

We will see if the combinaltion of Romo and Garrett will continue to produce more memorable season-ending finishes – for the wrong reasons – like former frustrated Cowboys head coaches Bill Parcels and Wade Phillips.  But for now, all eyes in Big D are choosing to look forward to the Cowboys huge Week 14 home match-up with the division-rival, New York Giants (8:20 PM ET on NBC Sunday Night Football), rather than concentrating on past failures.  The Cowboys — led by stars Romo, OLB DeMarcus Ware, TE Jason Witten, and WR Dez Bryant — have a 1-game lead in the NFC East, but they also have 3 crucial divisional games in their final four (NYG, @TB, PHI, @NYG) that will either equate into a division title and a home playoff game or another disappointing finish, which would cause America’s Team’s fans to  continue crow about Romo’s “choker” staus and Jones becoming even more cantankerous about his team’s late season swoons.

Lloyd Vance is the Editor  for Taking It to the House , who is also an award-winning member of the Pro Football Writers of America (PFWA).  Lloyd can be reached on Twitter @lloydvance_nfl