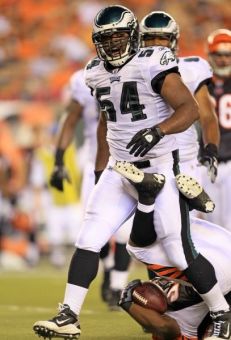 Detroit Lions DT Ndamukong Suh — Lions head coach Jim Schwartz and GM Martin Mayhew seem to have finally found their much-needed cornerstone for a defense that allowed an NFL-high 494 points in 2009.  Suh is a dominant player, who produced 85 tackles, a NCAA leading 24 tackles for loss, 12 sacks, and 1 forced fumble in 2009.  He is cat-quick and strong which allow the former All-Big 12 star to stay on the field in run and pass rushing situations.  You can expect Schwartz’s young defense to apply more pressure and produce more sacks and turnovers in 2010 due to Suh helping out emerging players like 2nd-year safety Louis Delmas.

Kansas City Chiefs safety Eric Berry – Look for a “Brian Dawkins” type impact from Berry.  The former Tennessee star learned a ton from former Volunteers defensive coordinator Monte Kiffin, who is a tried and true teacher of NFL defenses.  The 2009 Jim Thorpe award winner should provide much-needed help over the top coverage as well as in box.  Expect this centerfielder to be impactful in the nickel, dime, and on special teams as he has a “Can Do” attitude.  If the Chiefs can finally sort out their ugly holdout situation with disgruntled veteran Jarrad Page, they could have one of the best safety combinations in the NFL.

Oakland Raiders ILB Rolando McClain – Al Davis’ team finally got a play-making inside linebacker that can make plays all over the field.  McClain (6’3, 258) was the 2009 Butkus Award winner and is a classic instinctive inside linebacker, who is a tackling machine.  I think he can have an impact similar to former Rookie of the Year DeMeco Ryans.  McClain is a smart leader who led the Crimson Tide to the 2009 Nationals Championship – 2009 stats: 105 TKLs, 14.5 tackles for loss, 4 sacks, and 2 INTs.  A Day 1 starter in the Raiders defensive scheme, look for  this former 2009 consensus All-American to help veteran DE Richard Seymour and the rest of the team’s defense right away.

New York Giants DE/OLB Jason Pierre-Paul – Another fastball for Giants head coach Tom Coughlin’s attacking defense. Pierre-Paul (6’5, 270) now joins Mathias Kiwanuka, Osi Umenyiora, and Justin Tuck which could translate into a ton of sacks for the G-Men.  New York has been looking for a replacement for Michael Strahan since his retirement after the 2007 NFL Season and this raw awesome athlete may be the answer.  Often compared to a young Jevon Kearse, Pierre-Paul as an 81-inch wingspan and 10-3/8 hands.  The first-team All-Big East performer led his team in tackles for loss (16.5) and sacks (6.5) in 2009.

Philadelphia Eagles DE Brandon Graham – Though the Philadelphia Eagles produced 44 sacks in 2009, there has always been a large hole opposite Pro Bowl player Trent Cole.  A “LaMarr Woodley” clone, Graham is a pure pass rusher, who has a relentless motor.  Though a bit small at 6’1, 263 pounds, this former Wolverine has a knack for getting to the quarterback — second all time in Michigan history in tackles for loss and sacks.  At the 2010 Senior Bowl, Graham was the MVP of the game as he produced 2 sacks, 1 forced fumble, and five tackles with three of them for loss.  Also in training camp and in the preseason, this first rounder has shown an ability to play aggressively against the run too.

New York Jets CB Kyle Wilson – You have to take your hat off to the NY Jets as they decided to bring in this former Boise State corner despite the presence of All-Pro Darrelle Revis and former Pro Bowler Antonio Cromartie. Well we all know that Revis is involved in the NFL’s ugliest holdout, so now Wilson (5’10/190) needs to step up.  This 4-year starter in college is great at both press and zone coverage plus he has great hands as shown by his 8 INTs over the last two years – returned two for TDs as a senior.   An academic All-WAC, Wilson is also smart and tough (never missed a game due to injury).  Also watch for him to help on special teams and in the return game.

Indianapolis Colts DE Jerry Hughes – The Colts love to stockpile undersized quick defensive lineman that can get pressure and that is what Hughes is known to perform like.  With veterans Robert Mathis and Dwight Freeney getting older and sometimes injury-prone, this former TCU star could be the right person to help rush the passer. I am sure the plan is for Hughes to be a “helper” this year and take over next year in case Mathis (disgruntled over his contract) leaves.  The former all-conference defensive end led the nation in sacks with 15 in 2008 and put up another 11.5 sacks last year.  You can expect at least 6 sacks from this speedy end in 2010, especially on Lucas Oil Stadium’s fast track.

New England Patriots CB Devin McCourty – The Patriots secondary was “long in the tooth” in 2009 as they started the year with Shaun Springs and Leigh Bodden.  After a while it was obvious that Springs couldn’t get it done any longer and he was released.  The expectation was for McCourty (5’11, 193) to help in the nickel with Bodden and emerging 2nd year corner Darius Butler starting.  But plans have changed after Bodden went down for the season with an Achilles injury.  Now Butler and McCourty plus fellow youngster safeties Brandon Merriweather and Patrick Chung are being asked to fix a defense that allowed too many big plays in 2009.  McCourty was an All-Big East selection in 2009, who can play man-to-man or Cover 2.  He also is a very good tackler (80 in ’09), has good hands (6 INTs in career and broke-up 10 passes) and should help on special teams.

The Best of the Rest