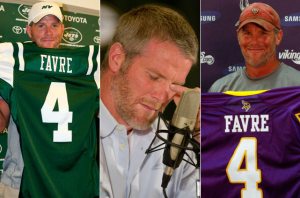 There has been a lot of “Favre to Philly Talk ” around, but Taking It to the House isn’t buying it

The next four days figure to be the busiest in NFL history as nearly 1,600 moves are expected to be made across the league in less time than it takes to wait between regular season games. Simultaneously, training camps across the country will be opening and players reporting as rosters are finalized by sure to be sleep deprived general managers.

Assuming the Eagles deal Kevin Kolb toArizonaor elsewhere, which they are expected to do in short order once the league year begins. All signs point to Kolb landing inArizonain exchange for cornerback Dominique Rodgers-Cromartie and possibly a draft pick. With that in mind, many wonder what Andy Reid and company will do to address the backup quarterback position.

On Saturday night Howard Eskin reported on NBC10 in Philadelphiathat the Eagles have interest in former Viking, Jet and Packer Brett Favre. The report was given some credence on Sunday when Michael Vick tweeted “I would be honored to have Brett Farve as a backup. That will be amazing Learning how to toy with defenses the way he did his whole career.” However, Vick conspicuously deleted the Tweet hours later.

Not to discredit Eskin and his story, but this move isn’t one that works for either side, and after speaking with several sources looks to be the longest of long shots.

There’s no doubt that The Eagles are in the market for a quarterback given that Vick hasn’t played a full 16 game season since 2006. However, Favre may be the least logical solution of any available signal caller. The thought of the 42 year old veteran winding up inmidnightgreen is predicated on him being content in a backup role for the first time in his career.

Some point to Favre joining the Eagles to mentor Vick, which is a ridiculous notion in and of itself. Vick has been a starter at a high level in the NFL for eight years, well past the point in his career when he would benefit from the tutelage of a player who plays the quarterback position as differently as one can imagine from him. Besides, lets not forget that this is the same Favre who had no interest in mentoring Aaron Rodgers when the Packers used a first round draft choice on the eventual Super Bowl MVP in 2005.

Eagles beat writer Les Bowen used his Eagletarian blog Sunday to bring some logic to the situation saying “why would Favre want to hold a clipboard in Philly? The money, under the tighter new cap, wouldn’t be lavish. His ego is as legendary as his arm,” Bowen said. “The only way he comes out of retirement for this job is if he thinks he somehow ends up at the helm of a Super Bowl contender, and even that scenario assumes Favre has some interest in trying to play again. Vick doesn’t need this. The Eagles don’t need this.”

While it isn’t a stretch to foresee Favre holding the NFL hostage once more and un-retire again, the situation in Philadelphiais far from an ideal one for him to rewrite is farewell story.

However, The Eagles have options they’ll likely pursue in the free agent frenzy to fill their need for a backup quarterback. Vince Young, Matt Hasselbeck, Marc Bulger and Tarvaris Jackson are all available in one form or another if Philadelphia chooses not to entrust Mike Kafka as Vick’s top understudy. Given Vick’s reckless abandon under center, and the ‘win now’ mentality permeating fromOne NovaCare Way, undoubtedly the birds will at least kick the tires on some or all of these options as an insurance policy.

Young has been an enigma in recent years, going so far as leaving the team in 2008 and disappearing after being booed by his home fans in a loss to the Jaguars. Then Titans coach Jeff Fisher ultimately coaxed Young back to the team. Last season in 11 games Young threw for 1,255 yards with 10 touchdowns and three interceptions for the Titans.  Tennessee is expected to release Young shortly after the league reopens for business and he would be an attractive option for the Eagles once he becomes available.

Andy Reid has developed a reputation for both developing outstanding play from the quarterback position and also as a mastermind at overseeing reclamation projects at that position. Both of which would certainly benefit Young, who despite the questions surrounding his motivation, still has the raw talent to succeed in the right situation.

“It wouldn’t surprise me at all if [The Eagles] acquired Vince Young after the Titans cut him.” Said a source close to the team.

Meanwhile, Bulger will likely draw interest from teams such as the Dolphins, Seahawks, Browns, Redskins and others as a starter and probably would not settle for a backup position. Yet his familiarity with the West Coast Offense and the allure of playing for a contender could put the Eagles in play if the former Ram who spent last season backing up Joe Flacco inBaltimorefails to land a starting gig. Bulger hasn’t been a full time starter since 2008 when he completed 57 percent of his passes for 2,720 yards, 11 touchdowns and 13 interceptions for the Rams.

Should the Cardinals fail to deliver the kind of bounty the Eagles are seeking for Kolb, the Seahawks could make a push to acquire him. The Seahawks brass could also turn the keys to the franchise over to Charlie Whitehurst who is currently the only quarterback on their roster. One thing is certain though, Hasselbeck will not take another snap inSeattle.

Like Bulger, Hasselbeck is attractive to teams in need of a starter. The 35 year old spent his entire career in the West Coast Offense and has ties to Reid. The Eagles could certainly do worse than Hasselbeck’s 3,000 yards and 12 touchdowns a year ago, stepping in should Vick fall to injury.

Finally there’s Jackson who would likely make the easiest transition to the Eagles offense since he played under former birds offensive coordinator Brad Childress inMinnesota.Jacksonhas been a part time player in recent years but at 28 and being the most mobile of the available quarterbacks, he’s an intriguing option especially given his familiarity with the Eagles system.

Clearly the Eagles have plenty of options available to back up Vick once the league reopens and the free agent shuffle kicks into high gear. One thing is almost certain though, Favre is not a fit and there is certainly a higher upside to any of the other signal callers on the market.

Matt Lombardo is a reporter and host for 97.3 ESPN in Atlantic City, NJ. Matt can be reached on Twitter @MattLombardoPHL