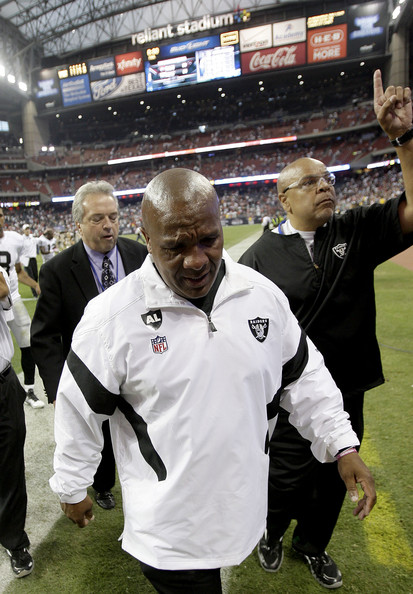 Oakland Raiders head coach Hue Jackson was overcome with emotion as his team, “Just Won One” for the late Al Davis.  The Raiders defeated the Houston Texans 25-20 in a bittersweet win

(Philadelphia, Pa) — The 2nd quarter of the NFL season began with a wild weekend filled with upsets, furious finishes, unbelievable comebacks, teams rising, teams falling toward the “parity” packed middle, downtrodden teams (1 or fewer wins) slipping toward preparing for the 2012 NFL Draft and further distinctions between contenders and pretenders.  As hard as it is to believe the NFL season is moving closer to being half over.  But the important thing for everyone is to enjoy the wackiest and quickest league around while it is lasts.  Week 5 of the 2011 NFL Season should have been titled, “Moving Week”.  Because this is the time of an NFL season where teams start to distinguish themselves as they move towards season-defining November and December games.

I love this time of the year, because separation starts between the good teams, middle of the road teams, bad teams, and wretched teams, that are “Believing in Later”, looking towards the draft in April.  As we get closer to the mid-point of the NFL season boundaries will become clearly defined between these different levels of teams.  That is not to say though that there will be some games where a surprise upset unfolds.  One of the bigger parts of this time in the NFL schedule is that byes (weeks 4-10) are crucial for resting injured players, making personnel moves, and overall reflection for teams to see where they stand post training camp/early season as they prepare for a playoff run or the draft. END_OF_DOCUMENT_TOKEN_TO_BE_REPLACED