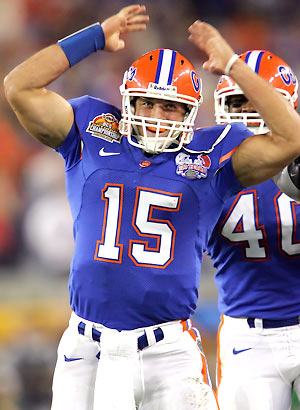 It seems every time I bring up the subject of 2009 college football season, the subject of Florida quarterback Tim Tebow– “hallowed be thy name” —  is the first topic off people’s lips.  The only player to win the Heisman Trophy as a “true” sophomore is BCS football’s version of Super Man.  He says his prays every night, drinks his milk, doesn’t stay up late partying or with his girlfriend – often noted that he is a “virgin” – and usually wins on most Saturday afternoons.

Tebow has been proclaimed by many in the press as being the “The Greatest College Football Player Ever” before the 2009 college football season has even started, thus fueling debates on his legacy everywhere.  BTW: Nebraska’s Tommie Frazier deserves the distinction as “Greatest”, in my opinion, as he played in three National Championships winning two and finished with a career record of 33-3 including destroying Florida 62-24 in the 1996 Fiesta Bowl while being named the MVP (199 rushing yards) despite missing significant time with blood clots.  Also Florida State head coach recently said to the Orlando Sentinel that his former Heisman Trophy winner Charlie Ward (1993) was better than Tebow. “People keep asking me about Tebow,” Bowden said. “You know, is he the best ever? I don’t know if he’s better than Charlie. I don’t think he runs better than Charlie. I don’t think he throws better than Charlie. And Charlie only played [quarterback] two years for us.”

Sure Tebow is everybody’s All-American boy as he boasts a treasure chest filled with accolades including a Heisman and two National Championship rings.  At 6-3, 240 pounds, and a record of 22-5 as a starter with abilities of leadership, instinct, and dual-threat athleticism (can beat teams passing and running), Tebow is on the cover of every college football magazine and truly is college football’s lovable bully.  Tim Terrific even was the recipient of a high profile coach’s man-crush as former NFL head coach Jon Gruden couldn’t say enough about him.  Some would say Gruden was Tebow’s biggest cheerleader after he gushed about him in a February 2009 interview.

“Tim Tebow is so interesting to me. He’s like Brandon Jacobs playing quarterback. He’s 250 pounds. He’s the strongest human being who’s ever played the position. Ever. He will kick the living [expletive] out of a defensive lineman. He’ll fight anybody. He is rare. Tebow is the kind of guy who could revolutionize the game”, Gruden said.  ESPN’s newest Monday Night Football analyst added, “(Tebow) can play quarterback in the NFL…This guy is totally different. He’s got Rich Gannon, Drew Brees, that kind of makeup as a team guy…That’s my favorite football player I’ve ever seen in my whole life.” Easy Gru-Dog before somebody says you having been stalking Tebow.

Despite the endless amount of publicity that Tebow garners for his work on and off the field (missionary work) – has his own Sports Information staff at UF, for goodness sake. I still have one question, “Can (Tebow) play on Sundays?”  At this point, I definitely need to see more before anointing him the next Peyton Manning in the NFL.  Too often I have seen overhyped college football quarterbacks fizzle out in the NFL (see Alex Smith, David Klinger, Andre Ware, Rick Mirer, Ryan Leaf and others) due to a variety of reasons.  Mostly college football hotshot quarterbacks fail in the NFL due to their inability to perform without a great supporting cast of the nation’s best recruited talent around them, not facing a “homecoming” team every other week and defenses specifically schemed to stop them.  Let’s face it, the game speed and lack of sophistication of college defenses allows the Tim Tebow’s of the world to get away with mistakes on Saturdays that would be turnovers in the NFL.  The college game is much easier and allows for less preparation by quarterbacks.

I don’t want totally bury Tebow before he even steps foot on an NFL field.  And I do consider him a great leader as shown by him willing his team to the 2008 National Championship including his famous Rockne-esque speech after the Gators loss to Ole Miss.  The speech is will forever be part of Gator football lore as it now is display via a plaque outside the school’s football complex.  But give me a break in thinking that Tebow – passing numbers of 192- 298, 64%, 2746 yards, 30 TDs, and 4 INTs in ‘08 –will waltz through the 2009 college football season and right into the first round of the 2010 NFL Draft.  I am amazed how some pundits already have mapped out Tebow’s 2009 season before it has even started — wins his 2nd Heisman, wins his 3rd National Championship (2nd as a starter), NFL first round pick and dominates at the next level.

I know 2008 was the year of the rookie quarterback in the NFL as both Matt Ryan and Joe Flacco led their teams to the playoffs.  But both Ryan and Flacco had a lot of pieces around them – strong running games and attacking defenses.  Plus both of them when they got drafted were light years ahead of Tebow in terms of reading defenses.  I believe that Tebow has a long way to go before the draft in April to prove that he is an NFL caliber quarterback.  For one thing, his throwing motion is a “push” / sidearm style, which lends me to believe he will get passes batted down at the line of scrimmage and his passes often wobble leading to questions of his arm strength.  Tebow also runs with a “fullback” mentality – you know I am running it and just try to stop me – which might work in college, but if he tries to run over a linebacker like Patrick Willis in the NFL, it may be his last run.  Lastly the 2007 Heisman winner locks in on receivers and often throws jump balls where great playmakers like Percy Harvin make him look good on Sportscenter.

I am not the only person that believes Tebow is not an NFL caliber quarterback.  ESPN’s NFL Draft guru Mel Kiper Jr. also is skeptical of Tebow at the next level.  The man with the best hair this side of Jimmy Johnson believes that Tebow would be a better pro prospect as an H-back or tight end.  Kiper was so vocal about Tebow, that Super Timmy once called Kiper’s radio show to express his displeasure with his assessment.  In a memorable exchange, Tebow said to Kiper, “You tell me this, What do you think I need to do to be an NFL quarterback? You tell me that.”  Kiper responsed, “You’re just too good with the ball in your hands not to think, Could he be Frank Wycheck? Could he be Chris Cooley? That’s why. You’re too good, doing what you do, Tim, running with the football. You’re just too good with the ball in your hands.”

The Florida’s head coach Urban Meyer has also heard the naysayers and this season has altered his spread option attack to help fix Tebow’s NFL deficiencies. Meyer also brought in new quarterbacks coach Scot Loeffler from the Detroit Lions.  Yes he was one of coaches from the NFL’s only 0-16 squad ever, but who keeps track of those sort of things anyway – hopefully Loeffler can teach Tebow not to run out the back of the endzone like former Lions quarterback Dan Orvlosky.  Tebow will be working hard with Loeffler to make him a better passer, which caused the NFL’s special draft advisory committee before the 2009 NFL Draft to say that he was likely to be taken somewhere between the second and 4th rounds.  That little bit of information caused Tebow to promptly go back to the “safe” confines of college football while allowing better quarterbacks Matthew Stafford, Mark Sanchez, and Josh Freeman to graduate to the NFL.

I am not saying that Tebow won’t get his chance in the NFL, but right now I cannot project him as an impact player as a quarterback in the NFL.  Without any more college eligibility after the 2009 season, Tebow will have no choice but to prove to NFL evaluators and his detractors that he is the “real deal”.  Maybe college football’s Super Man will prove me and others thinking that a position change is in order that we are wrong.  But Tebow will have to earn his way in the NFL and trust me it won’t be so easy playing with the big boys.  Many NFL veterans are tired of overhyped college stars getting big contracts and a coming into NFL lockerrooms with a “big man on campus” attitude.

Only time will tell if Tebow has the goods to make it in the NFL.  But the first step for Tebow to prove his doubters wrong, of course after his “anticipated” magic carpet ride 2009 college season, is participating in the post college process.  I cannot wait to see him at the College All Star games (I recommend the Senior Bowl), the NFL Combine, and at Florida’s Pro Day.  And I am sure at all of these post college events, that Tebow receive the same “treatment” that other former decorated college quarterbacks, who were so-called “non-NFL quarterbacks” (Pat White, Vince Young, Brad Smith, Eric Crouch, and others) got from NFL evaluators.

Lloyd Vance is a Sr. NFL Writer for Taking It to the House and an award-winning member of the Pro Football Writers of America (PFWA)